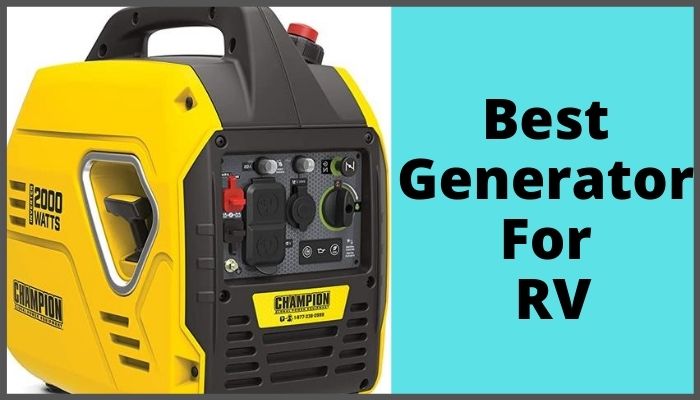 The best generator for an rv owner will give you the power you need while literally fitting into the RV lifestyle. However, there is no one size fits all solution, since different families have different power requirements. Let’s look at some of the best RV generators on the market for RVers. Here are our top six picks.

This gas powered generator will run as long as you have fuel. One reason it made our list is because it is CARB compliant. That’s the strictest environmental standard in the United States. It puts out relatively little noise and fumes. For example, its average noise output is around 53 dB. It is 19 inches by 12 inches by 18 inches, making it one of the smaller generators in this product category. It weighs roughly 50 pounds.

This unit has the unusual trait of burning off fuel in the carburetor before it shuts down. This reduces the amount of maintenance you need to do.

The unit has two 120 volt power plugs, one 5 volt USB port and one 12 volt DC plug for running RV appliances on. The built-in inverter allows it to deliver the clean, steady power necessary to safely recharge smart devices.

The generator seems dishonestly labeled. It is rated as a 2250 watt generator. This is rated for 1600 watts of continuous load. It can deliver 2000 to 2200 watts of surge power.

The gas tank is only one gallon. Expect to be refilling it regularly if you’re continually drawing power.

This generator is rated for 1800 watts of continuous power and 2200 watts of surge power. It is gas-powered. It can be combined in parallel with other iGen generators from 2000 to 2500 watts. This requires a Westinghouse brand parallel cord.

What makes it unusual is the camo pattern on the generator. It will blend into the background, assuming it isn’t operational and making noise.

It weighs 46 pounds. That’s a little lighter than average. There are no wheels on the generator, but it has a built-in carry handle. You could carry it to your off-the-grid campsite. This may be the best generator for an rv owners who regularly go hunting.

This is a CARB compliant generator. It is more fuel efficient than average. With a 1.2 gallon fuel tank and economy mode, it could run up to twelve hours.

The unit has two 120 volt plugs for AC power and two USB outlets. It creates power with less than three percent total harmonic deviation. That makes it safe to charge smart devices.

Westinghouse has been making appliances for decades. Its quality has declined in recent years. These units sometimes fail to run smoothly, or key components may not screw in tightly. A more serious problem is the need to remove a side panel to change the oil or drain the carburetor. This means you have to nearly take it apart to do regular maintenance.

This is another energy storage device that can take the place of a generator in some cases. It can deliver 110 volts AC, 12 volts, and USB power.

It has a built-in SOS light, as well. Note that the emergency light will work until the unit is completely dead.

It is supposed to have an MPPT solar charge controller built into the device. This generator does not come with solar panels, though it generally ships with the necessary connecting cables. It does have a charger that you can plug into the car charger port, though it charges slowly that way.

The unit is slower to charge than average, and it discharges rather quickly. It requires the same battery maintenance as a laptop battery; fully charge it every time if you want to make sure it can fully recharge in the future. Sometimes it has sat in storage so long at the retailer that you get one that can’t charge to more than 50 percent “out of the box”.

If the power capacity gets too low, the control screen may fail to come up and the unit refuses to work at all. It has trouble charging a smart device and running a small appliance at the same time.

This generator puts out 1700 watts of AC power at a steady rate. It can deliver 2200 watts of surge power. You can connect it in parallel with a similar generator by Generac, but the parallel connector kit is sold separately. Because it is an inverter generator, it should allow you to safely charge electronics.

This generator has a 1.2 gallon fuel tank. It has average to above average fuel efficiency, though it is not CARB compliant. It can run ten hours at a low load, also called economy mode. However, it may take several tries to start.

The unit has a built-in carry handle. This isn’t always as durable as you’d expect it to be. The noise level is fairly typical for generators of this size.

These units are not reliable. They may run rough right out of the box. This can result in poor power quality. In worst case scenarios, you see electrical shorts or metal rubbing on metal.

One of the biggest problems is changing oil. You have to tilt the unit on its side to drain the oil. This is messy and difficult to contain.

The unit puts out 1700 running watts and 2000 starting or surge load watts. It can be connected in parallel with a similarly powered generator, but the required kit is sold separately.

At forty pounds, this is one of the lightest inverter generators in this product class. It puts out roughly 60 decibels of noise, so it isn’t louder or quieter than average. The eco-mode theoretically extends its operational life, but it sometimes only idles instead of producing 25 percent power.

This unit has two 120 volt 20 amp power outlets. The inverter built into the generator allows you to safely charge electronics. It also has a single 12 volt power port. Unlike many generators, these outlets have covers you can snap into place to prevent dust from accumulating in them.

The unit is unusual for being made to start nearly effortlessly, including in cold weather. It has standard safety measures such as a low oil shutoff. This is the best generator for an rv owner who often camps in the winter.

These units are affordable, but they’re not durable. They wear out within two years of regular use and a year of heavy use.

This Jackery brand power station is not a standard gas-powered generator. It is designed to be charged via solar panels or powered up plugged into the wall at home, then releasing a steady stream of power when you’re out camping. It is actually designed for use with two 100 Watt solar panels. The unit has a built-in MPPT power controller and comes with the cable necessary.

Solar panels are extra. If you connect it to two compatible solar panels, it will recharge in around 8 hours. It can also be charged via your car’s 12 volt plug, though that takes 14 hours. It comes with a single car charging cable.

Because there are no moving parts, it only needs enough space for its energy-dense batteries. This is why it is around 13 inches by 11 inches by 9 inches. Because it isn’t burning fuel, it is safe to have inside of an RV living area.

The unit has two USB C ports and a quick charge 3.0 port. Furthermore, it has three AC outlets to let you run several appliances at once. Think blenders, an electric shaver or lights. It might run a single TV or mini-fridge for a few hours. It can also be used as a backup source of power in your home. Keep it fully charged, and it could be used to run an insulin fridge, radios or CPAP machine.

This energy storage device cannot meet the high load of the most energy-intensive appliances. For example, you can’t use it to run a microwave oven. Don’t use it with a hair dryer or induction cooker. It might run a basic hot plate.

You need to fully charge it every time to avoid the battery chemically resetting to the point it cannot full recharge again. This is the best generator for an rv owners who need a steady, ten hour long power supply at night.

The best RV generator for your family will power your family on or off the grid. It will eliminate the concerns you may have while improving your family’s safety.