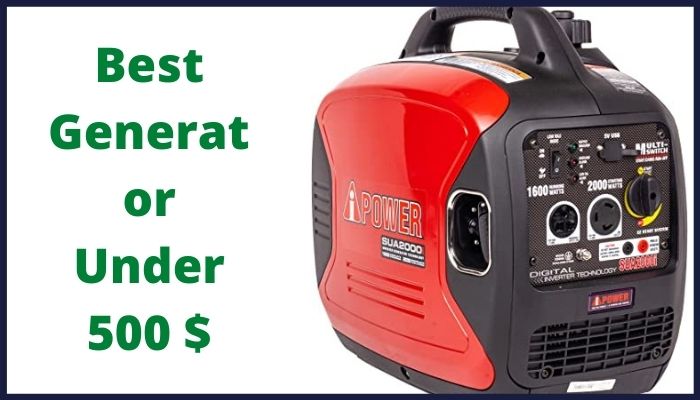 Whether you need a generator to power your life on the road and off the grid or want a cheap generator to serve as a backup power source if the grid goes down, you probably don’t have a lot of money to invest in one. Nor can you afford a generator that won’t work when you need it most. That’s why we’ve curated this list of the best generators under 500 dollars. We recognize that there everyone’s needs differ, so you can find the best generator under 500 dollars given your particular situation.

This inverter generator is CARB compliant. That means it meets California’s incredibly strict emissions standards. You can take it into any state park or federal park. This is because the noise level is 53 dB, below government limits for generator noise levels. However, there are quieter models on the market. This is because the 53 dB rating is assuming it is more than ten feet from your vehicle.

Because it is an inverter generator, it is safe to use to charge your sensitive electronics. It has one USB port to make that possible. It also has two 120 volt power plugs and a single 12 volt DC plug to run RV essentials off of.

This generator like many others is advertised and even named based on its surge capacity of 2000 watts. Its running capacity or the load it can carry until it runs out of gas is 1600 watts.

One downside is that the unit requires repeated start attempts, especially in winter. A different problem is the radio frequency interference it generators. Running the generator could interfere with your WiFi and your ham radio equipment. It is an affordable generator, but it has average to below average reliability. It may experience problems after just a few uses. Furthermore, it can be hard to get the generator serviced if something is wrong.

A-iPower is not a well-known generator brand like Westinghouse or Honda. This is an affordable unit made in China is designed to put out a constant 1600 running watts and 2000 watts of safe power. It will shut down if you try to run 2000 watts through it for more than a few seconds. It cannot support a microwave oven. The built-in inverter evens out the power fluctuations, so you can use it to recharge a smart phone or power a laptop computer.

It has an average noise level of 58 watts. At 46 pounds, it is a little lighter than average. It has a built-in carry handle.

The unit is generally easy to monitor and maintain. The unit can be hard to start. The cord takes several pulls. Occasionally, the cord breaks.

This is another cheap generator that doesn’t meet FCC standards for low radio frequency interference. This might interfere in your WiFi connection or amateur radio equipment.

You cannot connect this generator in parallel with other generators, not even of the same manufacturer. You don’t get USB cables or adapter plugs. These accessories are often included with more expensive generators. It doesn’t come with oil or an oil funnel, so expect to buy those things in order to get the generator running.

This is a literally more powerful generator than most on our list. It is a 3500 Watt gas generator with a peak load of 4400 watts. It puts out roughly 7 horsepower, enough to run some power tools. You could plug in both 120 volt and 240 volt equipment simultaneously or only 120 volts at full power. (there are 2 120 volt outlets.) This is one of the few systems that could let you plug in a refrigerator, air conditioner or oven and run it. It can meet the high amperage. The EH version can run propane. This one is gas-only.

The higher noise level of 69 decibels is proportional to its power output. It is also larger because it is designed to burn more fuel and generate more electricity, hence the 24 inch by 17 inch by 17 inch profile. The gas tank alone is four gallons.

This generator has an electric start. The manufacturers include a number of other conveniences like a spark plug wrench set, an oil funnel and a set of DC charging cables.

It comes with a wheel and handle kit, but you have to assemble it. You’ll want the wheel kit on it because it weighs more than 100 pounds. This isn’t just due to the size and power capacity. For example, the gas tank is metal.

One issue with this generator is that it is so large that it often gets damaged in shipping. For example, the carbon filter intended to remove most of the toxic chemicals from the exhaust is prone to being broken during shipping.

This unit has better than average safety protections. For example, it has a surge arrestor as well as a GFCI outlet. It typically starts easily. This is due to the electric start button. The only caveat is that the battery needs to be working.

The handles on the handle and wheel kit are problematic. They are intended to fold out of the way. The problem is that they may fold when you don’t want them to. If the carbon box for the air filter hits the ground, that can be damaged. This means you need to be careful with the height of the metal frame, keeping the fixed foot stands roughly six inches off the ground. Plus it is hard to get replacement parts.

The instructions themselves are poorly thought out. You get two sets of instructions, and you need the second one tucked away inside the generator to complete steps outlined in the first set of instructions.

This is more of a dense battery than a generator. However, it stores enough power to be able to serve in place of a generator in many cases. It can deliver power via 110 volt AC, 12 volt DC and USB type C plugs. It also has a built-in bright white light. Light up your campsite or use it as an emergency beacon.

One downside is that you have to fully charge this power station in order to be able to use it. Furthermore, it needs to be fully recharged between uses to be able to hold its charge. It loses its charge over time, roughly ten percent every three days. Don’t plug it in for a month, and not only is it at zero but it may not recharge. If the controls don’t work, you can’t do anything with it even if it is fully charged.

Note that you can’t use the AC power while charging it either plugged into the wall or via solar panels. Plugging anything into it while it is charging can cause it to malfunction.

This is the only dual fuel generator on our list. It can run on both gasoline and liquid propane. That makes this the best generator under 500 dollars for people who regularly rely on propane tanks to power their off-the-grid lifestyle.

It lets you track everything from runtime to voltage to the time since you last changed the oil filter. Replacement parts are easy to find. It also comes with an LPG hose with a regulator.

It has a model TT-30R 120 volt RV outlet, a L5-30R outlet, and two 120 volt household outlets. You’ll need an adapter to safely charge your smart phones.

It puts out 68 dBa. This makes it much louder than some of the others on our list. Making matters worse, the 68 decibel rating is based on measurements of 30 feet away. This generator is too loud to have sitting next to the RV.

The best generator for under 500 dollars will deliver the power you need in the form you can use it. It will come with the safety features you want and conveniences you’ll be glad you have.